This glossary provides a brief description of the terms and components widely used in the pneumatics industry. If there is a term you don't understand or can't find in the Pneumatics Glossary, please don't hesitate to contact us at Rowse Pneumatics.

Air Compressed (pressure). Air that has its pressure increased to more than the normal atmospheric pressure.

Air Bleeder. A device (usually a valve) that removes air.

Bistable refers to the maintained operation or signal to a valve for operation. Bistable is sometimes referred to as latching.

Condensation. The conversion of a gas or vapour into a liquid by the reduction of its heat.

Contaminant. Any intrusive substance or material that adversely affects performance of a system or component.

Cushion. A support or protection against impact, providing controlled resistance to excess motion.

Cylinder. A mechanical device for converting fluid power into mechanical force and motion. It usually comprises a cylindrical bore with a moveable element inside, frequently a piston with a rod, ram or plunger.

Cylinder Bore. The diameter of a cylinder's internal cavity where a piston travels.

Cylinder Cap. A cover for the cylinder end that closes off the bore area.

Cylinder Capacity. Defines the volume of air required for one full piston extension.

Cylinder, Double-Acting. A cylinder with the pressure force driving the moveable elements in both directions.

Cylinder, Tandem. A composition of two cylinders mounted in a line, with the pistons connected by the same rod.

Cylinder, Through Rod. A cylinder with a piston rod extending through and out of both ends.

Cylinder, Piston Type. A cylinder operating by means of a piston and piston rod.

Cylinder, Single-Acting. A cylinder with a pressure force that drives the moveable elements in one direction only.

Detent. A device or method used to mechanically arrest or resist the rotary action of a spindle, axle, or wheel in its last position. It can be a valve, pin, latch, machine or other method of maintaining the rotating object in a temporary state.

Dew Point. The temperature to which a gas or air must be cooled to produce a condensate vapour.

Filter. A device for removing contaminants from a gas or liquid, usually a porous material or membrane.

Fitting. Any closures or connectors required to connect sections of pneumatic tubes, pipes and hoses.

Fitting, Compression. A fitting that joins two tubes or pipes together by a mechanical seal or grip, requiring no weld.

Flow. The movement of gas or air in a steady or continuous stream, generated by differences in pressure.

Flow Output. The flow rate when it is discharged at an outlet port.

Fluid. A substance such as air, gas or liquid that has no fixed physical shape and is capable of flowing.

Fluid Power. Energy that is generated, controlled and transmitted using pressurised fluid such as oil, water or gas.

Filter-Regulator-Lubricator (FRL). FRL units prepare compressed air so it can be used in a fluid power system. Contaminants are filtered out, the pressure regulated and the output air lubricated so it will pass more easily through pipes and hoses.

Gauge, Pressure. A device to measure and indicate air pressure in a pneumatic system.

Hose. A flexible tube for conducting fluid media from one point to another. Hoses are generally sized according to their inside diameter.

Heat Exchanger. A device used to transfer heat between two or more fluids, usually via a conducting wall that separates one fluid from another. Some heat exchangers require no wall, such as when a gas is cooled by passing it through a liquid.

Line. Any pipe, tube or hose used for conveying gas, air or fluid.

Line, Return. Any pipe, hose or tube used to convey the working fluid back to the reservoir.

Line, Working. Any line used for the conveyance of fluid power.

Lubricator. A device that supplies metered or controlled amounts of a lubricant into any kind of fluid power system.

Manifold. A pipe or chamber in a machine such as a cylinder, with several openings that allow gases or liquids to enter and leave.

Manifold Block. A large block base, on top of which several valves will be fitted, which can be configured for many different types and sizes of valve and flow.

Maximum Inlet Pressure. The maximum pressure supported by the inlet port of a regulator.

Momentary. A switch action that causes a device to return to its normal punctuated state when the operating force is removed.

Monostable refers to the momentary action, or pulse. In the case of a monostable valve, the valve will only remain open/closed with the a maintained signal/input.

NC: Normally-Closed (fluid power). Also called NNP (normally not passing). Defines the condition of a valve or output whose normative state is OFF, barring any external influence.

NO: Normally-Open (fluid power). Also called NP (normally passing). Defines the condition of a valve or output whose normative state is ON, barring any external influence.

Pipe. A form of non-flexible tube whose size is determined by its external diameter and is standardised for thread fittings.

Piston Rod. The element in a cylinder that transmits the mechanical force and motion coming from the piston.

Poppet. A tapered plug, sometimes called a mushroom, that opens and closes a poppet valve. Comprised of a disc on the end of a valve stem, the poppet is guided into a hole through the valve shaft, and the valve is closed when the disc is pressed into the valve seat. The poppet valve in pneumatic systems is operated by differences in air pressure.

Port. A generic word for a place where things go in or out; in machine terms the port is an inlet or outlet terminus of a machine or component to which hoses or pipes can be connected.

Pressure. The amount of force applied at a perpendicular angle to an object's surface, in relation to the unit area over which it is distributed. Usually expressed as psi (pounds per square inch) or a widely used metric measurement (bar) corresponding to atmospheric pressure (100,000 pascals) rather than standard atmosphere (101,325 pascals).

Pressure, Absolute. The measurement of any pressure above zero (vacuum), corresponding to the sum of gauge and atmospheric pressure. In vacuum applications this is usually expressed as a measurement in millimetres of mercury (mm-Hg).

Pressure, Differential. Any relative difference in pressure measured between any two areas, including parts or components of a pneumatic system.

Pressure, Gauge. The pressure differential measured above or below the ambient atmosphere, corresponding to absolute pressure minus (or plus) atmospheric pressure.

Pressure, Inlet. The pressure value measured at the inlet port of any apparatus.

Quick-Disconnect Fitting. A component designed for the quick release of a fluid line, requiring no special devices or tools to operate the connection.

Rated Flow. The maximum rate of flow that equipment can maintain at a specified operating pressure.

Reservoir. Any container where a medium is stored for later use, used in some fluid power systems.

Seal, Rod. Also called gland or shaft seal, this is a ring device to seal the internal periphery of a piston rod, to prevent any pressure leakage round the shaft when the piston travels inside a cylinder.

Sensor. Any device that detects a change in external conditions and transmits it to a controller.

Silencer. Any device for reducing noise, particularly in the venting of exhaust pressure.

Sub-Base, Subplate. A mounting on which a valve or system of valves is fitted, which includes external connection ports.

Temperature, Ambient. The surrounding air temperature of an object or environment.

Tie Rod. A structural element that can be used as a mounting device, or as an external axial cylinder element that extends along the length of a cylinder to hold its ends against the connector tubing.

Torque. A measure of the force required to make an object rotate around an axis, as calculated by the distance from the pivotal point where the force is applied and its intensity.

Transducer, Flow. A device like a flow meter that converts a fluid flow measurement into an electrical signal that can be transmitted to a control device.

Trunnion. A type of mounting device consisting of a pair of projecting cylindrical pivots, set opposite each other with the cylindrical pivot pins at right angles or perpendicular to the piston rod's axis, allowing rotation in a plane.

Tubing. A form of cylindrical piping used for conveying pressurised air, gas or liquid to tools, machinery and pneumatic systems, usually sized by its external diameter.

Vacuum. Any space where matter, particularly air, has been removed and the pressure reduced to a level much lower than ambient atmospheric pressure. It is measured in inches or millimetres of mercury (mm-Hg).

Valve. A device that controls the direction, pressure or rate of fluid or air flow.

Valve, Actuator. The means by which a valve operates, being the part through which some force must be applied to position or move the flow-directing elements that cause the valve to open or close.

Valve, Air. A valve for controlling the flow of air into and out of pneumatic systems.

Valve, Direct-Operated. Any form of valve which operates by the direct application of controlling force to the medium to initiate movement, rather than a valve applying control force to a secondary or pilot valve.

Valve, Directional Control. A valve which directs or controls the flow of air, gas or liquid from one or more sources into different selected pathways.

Valve, Directional Control, 3-Way. A type of directional control valve whose specific function is to direct flow outward between one of two ports, either to an actuator or to an exhaust a port.

Valve, Directional Control, 4-Way. A more complex directional control valve whose function is to direct flow in three paths between four ports, from inlet to actuator, exhaust or reservoir tank.

Valve, Flow Control. A valve whose primary function is the control or metering of flow rates.

Valve, Pilot. A valve that applies its controlling force to another valve that then controls the process.

Valve, Pilot-Operated (indirect). A valve in which the main flow media are controlled by two chambers, allowing a relatively small indirect flow to pass through into an integral pilot flow path.

Valve, Pinch. A simple shut-off valve consisting of a flexible rubber or polymer sleeve, that is pinched or distorted to control air, liquid or gas flow.

Valve, Poppet. A valve with a shaft topped by a tapered plug or disc (poppet), which closes or opens the flow path as the poppet is seated in a cavity or lifted out of it. Also called a mushroom valve and common in combustion engines.

Valve, Shuttle. A connective OR device used in pneumatic systems to allow fluid flow and provide pressure from two different sources, without any threat of back flow between them.

Valve, Slide. A valve with flow paths connected or isolated by the rotary or axial movement of a flat sliding component.

Valve, Spool. A valve consisting of a spool or shuttle inside a valve body, with strategically placed holes configured to ports in the body which act as outlets, inlets or exhaust. 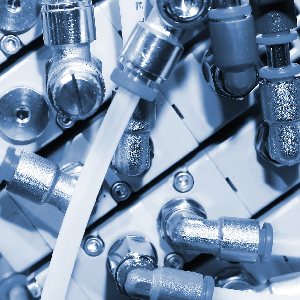 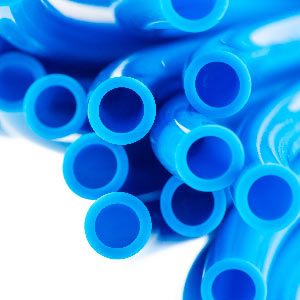 How To Size Pneumatic Pipe/Tubing 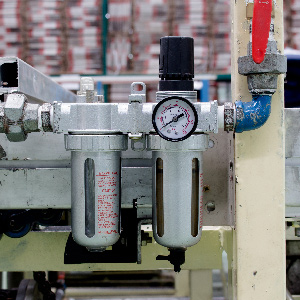 What Is An FRL? 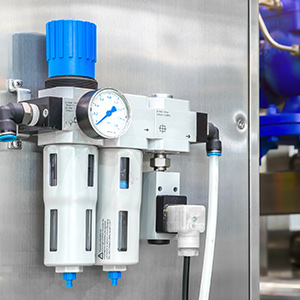 When To Replace Pneumatic Filters