There is a lot of discussion in industrial and control automation circles about what type of actuation is best for your system. The latest generation of technological improvements mean that both electrically driven and pneumatically driven actuators are more effective than they used to be, and are both constantly being reduced in size and noise levels, while introducing improvements in efficiency. On the other hand, modern production requirements are becoming increasingly sophisticated, and drive technologies need to be optimised for each individual task to provide the best possible solution.

Each drive technology is produced in different forms and designs that also have a bearing on which type of cylinder you choose. Important criteria to consider include required force, dynamic response, control characteristics and capabilities, load stiffness and, often most importantly, economic efficiency. There are still some basic advantages and disadvantages to each option, however, and the final choice may well be a compromise, depending on each individual's requirements.

What is an Electric Cylinder?

There are two types of the electric cylinder; screw-driven and belt driven. Screw-driven electric actuators convert the rotary motion from a stepper or servo motor by the use of a ball screw and ball nut configuration. Screw-driven actuators are commonly supplied in ball screw and lead-screw designs, ball-screw actuators convert the rotary motion into linear motion through a ball screw and ball nut arrangement. A simple analogy for a ball screw-driven actuator is a nut running up and down a threaded length of rod with the ball bearings added to reduce friction. This type of linear actuator is not self-locking, and some applications may require additional braking such as in vertical applications. Ball screws do require regular lubrication.

Lead screws use a low-friction polymer or bronze nut for decreasing the friction; this makes the cost less expensive than a ball screw type. However, the friction is higher than a ball screw. To compensate for the higher friction bigger motors with higher torque may be required to drive the same load and same speed with a comparable ball screw actuator. More friction creates higher operating temperatures and increases the wear on components. Screw-driven actuators can exert high forces and can be highly accurate depending upon the pitch of the spindle thread.

Belt driven systems typically use a fibre belt to drive the linear motion, belt driven actuators have a similar operation to a conveyor belt. Belt driven systems can scale up the travel distance more efficiently, and they have fewer moving parts, demanding less maintenance, although belts do require periodic re-tensioning. This makes belt driven actuators less efficient for heavy loads, as even thicker belts are prone to stretching.

The motor applies mechanical power to produce the kinetic energy that enables the linear assembly to move. The amount of force that an electric actuator delivers depends on how powerful the motor is, and what load it has to move. Some typical loads are precision cutting systems such as lathe assemblies, overhung load systems such as gantries, and overhead transportation and machine tools. Twin slide rails can be used for robot applications such as transport units and Cartesian robotic arms.

The versatility of electric cylinders in performance and their low maintenance make them a good option for robust power applications, and advancing technology is helping to bring down costs. Electric actuators offer more enhanced control, even in demanding environments, and they can supply very high forces with great precision. They can be programmed for any number of exact positions, whereas standard pneumatic cylinders are limited to two or three (more for servo-pneumatics). Electric cylinders are also very flexible in regard to force requirements, ranging from a ball screw actuator, which can push up to 40 short tons (80,000 lbs), to a speedy toothed belt drive which can operate at up to 10 metres per second.

On the down side, dynamic response may have to be sacrificed in favour of the high force electricity can deliver, depending on the gear ratios and the load. Higher force is better achieved at low or medium speeds, such as that produced by a spindle drive, while higher speeds offered by a toothed belt drive will achieve less force. Electrically driven systems are typically more complex to install and maintain, requiring specialised knowledge to commission and operate. An electric cylinder excels in programmable precision control and can include encoders for torque, position, velocity and applied force. They are quieter and won't leak, but tend to cost more and may not always be suitable for hazardous environments.

What is a Pneumatic Cylinder?

Pneumatic cylinders translate the force of a pressurised flow medium into kinetic motion, usually by means of a piston or slide. Compressed air going into the cylinder forces the piston to move a rod in a given direction, transferring the mechanical energy of its applied force through kinetic energy into the load to be moved. Piston-driven pneumatic cylinders can be single or double-acting to improve directional functionality. Pneumatic cylinders do not separate the mechanical system and the drive function, because the mechanical system does both. This means that they take up much less space, and are better suited for applications where space is critical.

Pneumatic systems can operate linear slides in much the same way as an electric cylinder, with the same choices of rod and rodless actuators. Rack-and-pinion units are also available with a rack mounted on the piston rod. This configuration will convert a cylinder’s linear motion into an angular rotation of 360° or more. This type of actuator is often used to operate quarter-turn valves. The most recent pneumatic cylinders come in many types and configurations, and can move loads directly or indirectly. Cylinders can push, pull, rotate, lift or lower or be directed by guide rods or blocks, and sometimes have two or more piston rods. Pneumatic cylinders can produce much higher levels of force at escalating velocities, don't have mechanical parts that overheat and don't stall. Guided cylinders provide precise and controlled linear motion, and are particularly valuable for withstanding offset or high side loads.

Pneumatic cylinders are simple, relatively inexpensive and can generate precise linear motion. They are better equipped to provide continuous force levels and offer reasonable accuracy and good repeatable positioning. Pneumatic actuation is preferred for operations in hazardous environments or areas of extreme temperatures. Having no motor, they create no magnetic interference and thus meet machine safety explosion protection requirements. Pneumatic actuators are cost-effective, lightweight, durable and require minimal maintenance. Next generation developments are also making them smaller and more efficient, even miniaturised.

Electric Vs Pneumatic: Which Should You Use?

A research project on energy provision completed in 2012 by the German Federal Government offered a simple breakdown of the efficiency comparisons pertaining at that time between an electric cylinder and a pneumatic cylinder drive system. Its conclusions were clearly demonstrated, proving that electric cylinders are very efficient for applications requiring larger strokes and shorter holding times, while pneumatic cylinders are preferred for applications requiring shorter strokes and longer holding tasks. Some years down the road, however, it may not be that clear cut.

For extremely high force applications, with pressures running into the thousands of pounds, a pneumatic (or hydraulic) cylinder will be required. Such heavy duty operations as presses, cranes, crushers, lifts or gantries for heavy equipment, require enormous force to move the loads. The cycle rate must also be taken into account, to determine whether an electric or a pneumatic cylinder would wear the fastest, and thus require more repair and maintenance during its working lifetime. Manufacturers can supply detailed information about these stresses and help you decide which of the two options would work better for you.

For applications requiring only medium force (10-1000 pounds) there is little to choose between the two options, and it comes down to considering other factors, primarily accuracy and positioning needs. Pneumatic cylinders are ill equipped to handle complex positioning tasks, though servo-pneumatic combinations may offer a wider range of options. Pneumatic cylinders for multiple stop functions can be manually adjusted and may still be a less expensive choice, but also rank low on accuracy. In any given assembly task, pneumatic systems are only going to be accurate to within a few millimetres, while an electric actuator can supply precision to ranges within a tenth of a millimetre.

For operations requiring low levels of force and slower speeds, such as simple push and pull functions, a pneumatic cylinder is quite adequate. A compressor delivers lower pressure and speed because it must continue to run and generate operating pressure at all times, even when the load is stopped.

Your application may need greater flexibility, which consequently demands more flexibility in the drive cylinder. For some picking and placing operations, for example, objects are picked from one conveyor and placed onto a different one. This could be one of two alternative conveyors, which would then require three position stops. This would be harder for a pneumatic system to accomplish, as it would currently need at least two different cylinders, one to operate with each conveyor. For an electric cylinder this is easy, because multiple points can be programmed and a position set at any or all of them.

On the other hand, pneumatics offer the primary benefit of being flexible in configuration, being simple to commission, install and operate. In the event that your application requires a change of stroke length, for example, it is relatively simple just to swap over the cylinder. In a live situation, however, and particularly if more complicated changes are required, this might not be so easy, and could involve unforeseen costs in time as well as cash.

When it comes to a decision between electric vs pneumatic cylinders, there is likely to be a trade-off between crucial factors, according to your system requirements. What it boils down to is a balance of required force, speed and positioning accuracy. Electric cylinders offer very fast movement potential, programmable speed and stop positions, with greater positioning accuracy and sensor feedback to supply greater motion control. On the other hand, they are limited by environmental safety considerations and require trained operatives to install and maintain them.

Pneumatically driven cylinders are still relatively fast, but offer an average of approximately one fifth to one half the speed of the electrical equivalent. They are far cheaper to acquire and maintain, and simpler to commission, install and troubleshoot. They can be noisier, but are cleaner in operation, which is ideal for many sensitive applications such as biotech, and food and beverage production. They win out on safety, because they can function in otherwise dangerous environments, and are highly durable. Pneumatic drives function on the technical operating principle of high continuous force and long holding times. Next generation servo-pneumatic drives are an interesting alternative for specific purposes, such as explosion protection, and offer more detailed motion profiles and proportional valve control.

Fluid power systems traditionally excel in simple applications where an electric system's best advantages are superfluous. The higher cost of electric cylinders at present can only be justified if precision, speed and accuracy are paramount. As with all technology, however, techniques are advancing every year, and costs are coming down. Some experts even believe that fluid power systems will one day be obsolete as providers of linear motion, but servo-pneumatics may well prove them wrong. It’s more common today to see a blend of technologies, even on a single machine. A heavy-duty press might perhaps deploy a large hydraulic cylinder for the main drive, combined with electric cylinders for loading and unloading functions, and pneumatic cylinders for gripping functions. 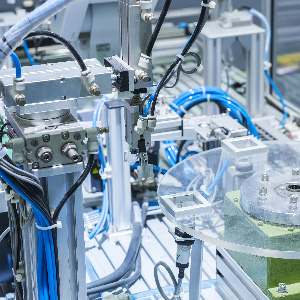 What Is Servo Pneumatics? 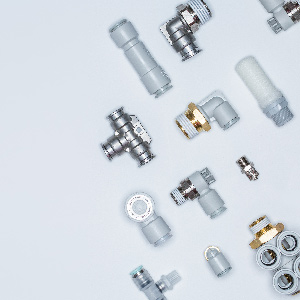 How To Choose The Correct Pneumatic Fittings 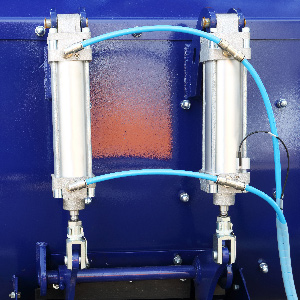 3 Ways To Get More Out Of Your Pneumatic System 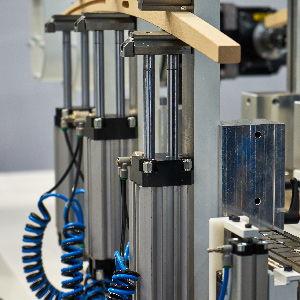 How To Install Pneumatic Cylinders